The team at Google AdWords recently announced an update on Google+ telling us of improved data freshness for search terms, geographic performance and automatic placement. 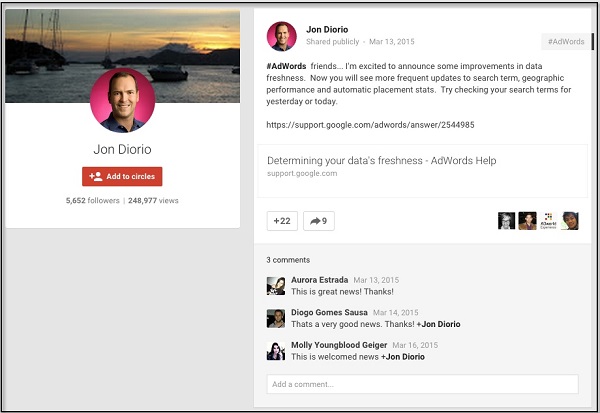 We like what we’ve heard about increased speed, though wouldn’t mind if Google took things a little bit further.

When you look at account data, you’re not necessarily seeing the freshest information. All performance metrics take some time to process, though that time varies from one data set to another.

In some cases, such as conversions imported from Google Analytics, updates could take up to 72 hours, depending on your zone. Similarly, if adjustments are needed after a click (invalid traffic, for example), updates may take more than one day.

In the AdWords support file on data freshness, Google lays out the processing times for metrics for specific regions:

Personally, I’d like to see real-time data reporting like we do in Google Analytics. At Group Twenty Seven, we often launch new campaigns and frequently refresh to see where things stand, though we can’t see the data quickly enough in some cases.

While we’ve learned to avoid knee-jerk reactions and remind ourselves not to make changes too quickly, it can still be a bit hair-raising.

For example, if we launch a new campaign and the spend goes wild very quickly, we might think we need to tighten up the keywords or focus on tighter match types to hit our CPA. If conversion data is slow to follow and we don’t know the campaign is producing results for three hours or more, it’s difficult to manage these campaigns at max efficiency.

So, how do we define “real time?” When you click and buy in AdWords, that’s happening in real time. If the reporting could come back in less than an hour after that, it would be much closer to real time than results in three hours. As PPC managers, we could offer our clients and companies improved service with this data.

I was excited to touch base with Google’s Jon Diorio, the AdWords product manager who announced the update, on Twitter. I expressed appreciation for the updated data freshness, but also mentioned that we’d love to see results in real time. 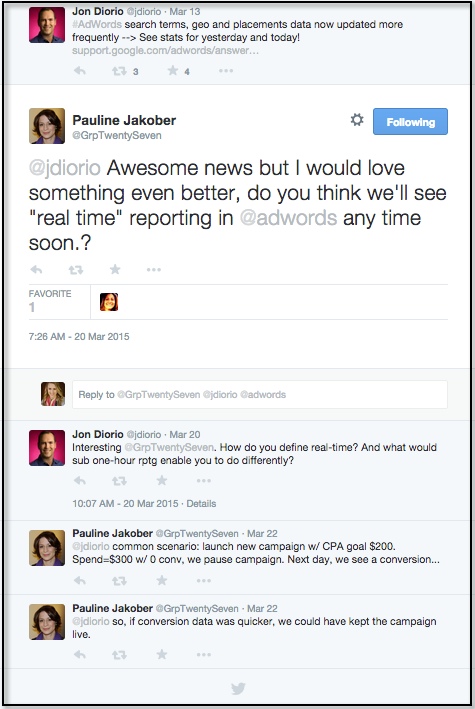 So far, he seems interested in the feedback, and I encourage others to reach out to AdWords with feedback as new features come out; there’s a good chance they’re listening.

We love the fact that Google AdWords is always trying to improve its offerings. As industry professionals, we voice our opinions and desires to perpetuate that evolution. To us, this data freshness update is great, but falls short of what we really need.

Do you have thoughts on this recent update? Tell us about it in the comments below!