And one strategy you might consider is using the extra space to qualify your B2B clicks.

Now you might argue that you’re already qualifying your B2B clicks via your choice of keyword—and that’s true. However, most often, keywords alone aren’t enough. You’ll still end up with lots of clicks that don’t convert.

Fortunately, the additional space of expanded text ads gives you the room to get more specific on whom you’re targeting. 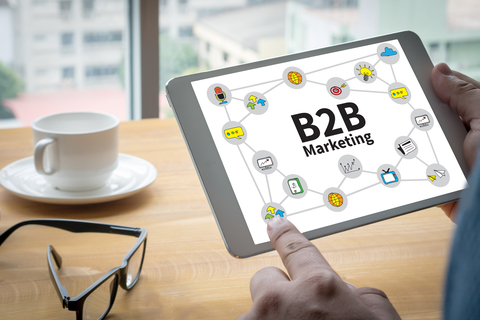 But before we delve into this topic, let’s have a quick refresher on expanded PPC text ads.

But expanded PPC text ads changed all that. Now the character limits are:

These new character limits give us a whole lot more space to work with:

The ad on the left is an old-style text ad. As you can see, it’s short and contained.

The ad on the right is an expanded text ad. It gives us a lot more real estate to work with!

Now let’s look at how to use this extra space to qualify your B2B clicks.

Expanded text ads give you a lot more space to qualify your B2B clicks, whether in the headlines or the description fields.

Frequently, keywords will appeal across multiple industries—even if you only want to target one.

Fortunately, you use the expanded text space to specify exactly which industry you’re going after.

As you can see, we’ve used the second headline to denote food and beverage manufacturers.

Which is good! Because if they had clicked, it would have cost you money and they wouldn’t have converted—which would have meant wasted ad spend.

Numbers are a great way to qualify. They don’t need much space to make a clear point.

This ad makes clear that these events are designed for larger groups. Therefore, people who are planning an event for a smaller group won’t click on the ad.

(Award yourself bonus marks if you noticed that this ad also qualifies by persona, with the terms “corporate” and “team building.”)

As hinted above, you can also use expanded text ads to qualify clicks by persona. In other words, you can use the extra space to get more specific about the “type” of entity you’re targeting.

In this text ad, we’ve made clear that these scavenger hunts are geared towards the corporate market. So people planning a scavenger hunt for a birthday party or bachelor party (for example), will be discouraged from clicking.

(Award yourself more bonus marks if you noticed that this ad also qualifies by numbers, with “for 50 to 1,000 people.”)

(Award yourself even more bonus marks if you noticed that this ad also qualifies by price, with “$88+ per person.”)

As suggested in the previous example, price is another easy way to qualify leads without using a ton of ad space.

In the example, this file sharing company has provided their price as a way to distinguish it from its competitors. In the file sharing market, price competition is fierce, so stating your price in your ad can be a good strategy.

Another obvious way of qualifying your B2B clicks is by location. We haven’t included location as an example because it’s something you can usually manage through your AdWords settings.

However, there may be times when it makes sense to include location as a qualifier in your ad text as well. (You’ll note we chose to do this in our second example, when we included “Austin” in our ad headline.)

These are four possible ways to qualify your B2B PPC clicks. With these qualifiers in place, you’ll have less wasted ad spend and better ad ROI.

What qualifiers do you use in your PPC ads? Where do you like to place them?