In childhood, monsters are something to fear. But if you grow up to be a PPC manager, you’ll come to LOVE monster accounts. You know the kind—accounts with hundreds of campaigns that, if not managed carefully, will take over the Empire State Building and eat Tokyo for breakfast.

But with a few controls in place, you can tame that PPC monster and produce some amazing results. 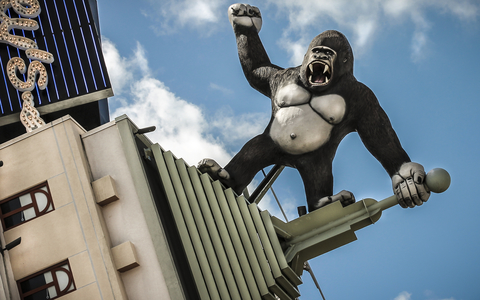 Naming conventions are hugely important for all PPC accounts, but especially big ones. It’s something to consider carefully at setup but also integrate into account maintenance. As you know, PPC accounts change through time, and these changes should be reflected in naming conventions—because the structure you set up on day one is going to look very different in year five.

The Group Twenty Seven team uses a number of different naming conventions, depending on the client and the account. Here are some of them:

We often use short codes to indicate the country, state or region where we’re running the campaign. For example, “-CO” for Colorado and “-WA” for Washington or “-CA” for Canada and “-MEX” for Mexico.

These two letter codes allow us to easily differentiate among regions, especially when data from multiple regions streams into one analytics platform.

Again, we’ll often use a two letter indicator at the end of a campaign name to indicate whether it’s using brand or non-brand terms.

3. Primary vs. Secondary vs. Tertiary

Some clients like to assign different bidding rules for different groups of keywords. They want to bid higher for keywords most essential to their campaigns and less for others.

To facilitate this, we’ll sometimes indicate whether the campaigns are primary, secondary or tertiary by inserting corresponding short codes into the name. This makes it easier to implement your bid rules and analyze this kind of bid strategy.

One of our most common naming conventions is to indicate business unit within the campaign name. With larger accounts, you’re typically dealing with multiple business units, and it’s helpful to have a simple way to differentiate them. Typically, we implement these by adding three- or four-letter codes to the front or end of the name.

We’ll often add codes to campaign names to indicate whether they’re mobile, tablet or desktop. This allows us to quickly see how each device is performing without having to do a deep dive into the data.

Some analytics platforms have visual cues to indicate whether a campaign is GDN or Video, but not all of them.

Another common naming convention we use are codes to differentiate between different product lines brands. Again, this facilitates search, filtering and analysis.

While we’ve been specifically talking about campaign names, the same principles apply to ad group names. In larger accounts, you might need to implement some of these naming conventions for your ad groups too.

Use Only the Naming Conventions You Need

You might look at this list and picture unwieldy campaign names that stretch across your entire screen. Understand that we’re not suggesting you use all of the these codes in every name. Instead, simply use the codes most applicable for each campaign or Ad Group.

Often, you’ll identify which naming conventions to use in the course of your data analysis. At some point, you’ll realize that you can slice and dice the data in the way you want, unless you put some differentiators in the name.

One tool we use to facilitate communication are campaign and landing page roadmaps. Our roadmaps are essentially detailed spreadsheets. Each campaign roadmap details one campaign and associated ad group. It explicitly lays out the messaging, sitelinks, callouts, structured snippets and extensions for each—all in one document.

We also use landing page roadmaps, which lay out each landing page (with screenshots) and details each campaign that flows to that landing page as well as the final URL and associated thank you page.

We use these roadmaps as tools to ensure that clients know what we’re doing. Even more importantly, it’s a good way to catch changes that the client has made to their business, products and/or marketing, which we were unaware of.

How do we coax clients to take the time to review these detailed documents with us? It’s not always easy! But here are some helpful tips:

1. Schedule meetings to review the roadmaps once or twice a year.

Review the roadmaps prior to launch and then six to 12 months thereafter. Put them in the calendar well in advance and stick to them.

2. Refer back to the roadmaps whenever time allows.

Typically, we’ll have standing weekly or bi-weekly meetings with the client to update them on their campaigns. But we won’t always use our full allotment of time. We use this as an opportunity to “take a quick look” at the roadmaps.

3. Review with all relevant stakeholders.

Usually, monster accounts have stakeholders across different departments and divisions. Resist the temptation to communicate only with the most responsive stakeholders. Persist in chasing after even the most hard-to-get-hold-of groups. Otherwise, when you do hear from them, it won’t be good.