I was interested to see a recent article in MarTech Today about how some major brands (Procter & Gamble in particular) are pushing back against programmatic advertising.

As stated in the article:

In the past year, major brands have called into question the notion that mass marketing necessitates a scattershot approach to digital advertising. Programmatic’s promise to deliver huge scale at cheap prices has brought to the forefront the tension between scale and vetted quality and transparency. Now stories of brands pulling back on programmatic with little to no downside for their businesses add a greater sense of urgency to addressing issues that have long plagued the ad tech industry. 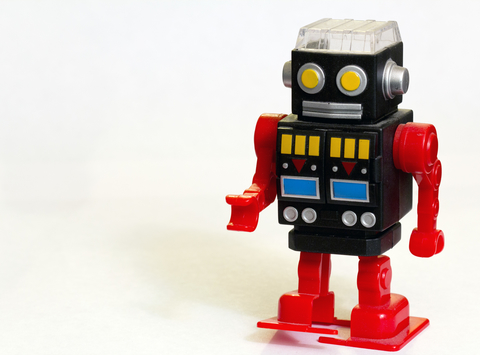 I found this article particularly interesting as it fits exactly with what I’ve been seeing. Specifically, my team manages the PPC programs of a client in the pharmaceutical industry. This client also works with a digital agency that manages its programmatic advertising. According to my client, his company has also been questioning the value of programmatic.

Why are big brands starting to push back on programmatic advertising? It’s a question worth exploring, both out of general industry interest and because it has the potential to impact the bottom line of PPC agencies as well as the budgets of in house marketing teams.

But before we dig into this topic, let’s review what programmatic advertising is.

What is Programmatic Advertising?

At its most basic, programmatic advertising is simply using technology to automate all (or part) of the ad buying and selling process.

Programmatic advertising quickly grew in popularity when it was introduced, with its promise of increasing efficiencies (automated buying and selling can occur much more rapidly than manual). It also promised more precise ad targeting across thousands (even millions!) of impressions.

By 2015, programmatic advertising had become the dominate way of buying and selling ads in the U.S.

More recently, the glow of these promises has started to fade. As quoted in the MarTech article, MediaRadar reported last month that the number of programmatic advertisers fell by 12 percent. Meanwhile, the number of advertisers running native advertising campaigns grew by 75 percent in the first quarter of 2017 (as compared to the first quarter of 2016).

Problems Getting With the Program(matic)

Why the growing disenchantment with programmatic? From what clients have told me (and from what I’ve read), everything boils down to three main issues:

The MarTech Today article notes that programmatic is dogged by its “black-box” nature. Because ads target audiences based on behavior and demographics, it’s not always clear where and when they appear.

As one CEO lamented in Marketing Week:

There is a lack of transparency in terms of where the ads sit and how audience profiles are garnered. Media agencies won’t give up this information, and simply tell brands to trust them.

This “black box” also makes it difficult (if not impossible) for brands to know exactly where their budgets are going. And when it comes to programmatic advertising, we’re generally talking massive budgets—so this is hardly a minor point.

Many brands complain that programmatic has gotten bogged down by jargon, making it almost impossible for outsiders to understand. (And one might argue that many digital agencies don’t fully grasp it either.) This further isolates brands from the advertising process and breeds suspicion and doubt. 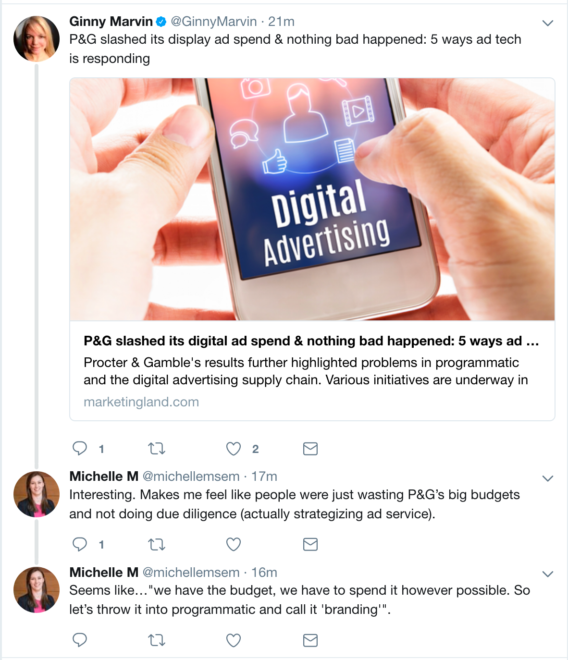 You must admit that Michelle M makes a good point!

Now this isn’t to argue that programmatic doesn’t have its place. For example, I’ve seen travel agencies and hotel chains place their ads (likely via programmatic) on weather-related sites. When the weather is miserable, people are more likely book beach-style vacations. Here, programmatic advertising makes sense!

But in many other cases, I’m not sure the big spend on programmatic advertising is justified.

Where Does Search Fit Into All This?

To strike a comparison, PPC agencies that run “hands on” campaigns are much more able and willing to be transparent about ad placements, fees and costs—which is kind of ironic given that budgets assigned to search engine marketing are typically a fraction of those assigned to programmatic.

It’ll be fascinating to see how programmatic advertising, and the digital agencies that run them, respond to these challenges.

Because you can be sure that whatever path big brands take with programmatic advertising—smaller brands will follow.